Artful INKables is also sponsoring Twilight Tuesday’s Hop that include Twilight Prizes, so be sure to check them out today as well! 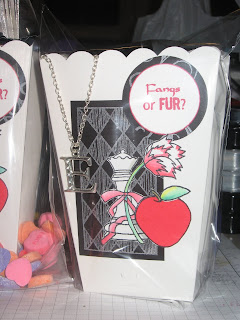 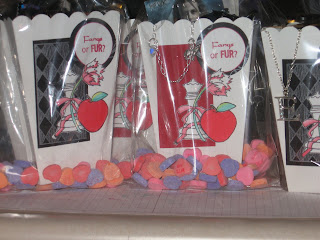 Instead of a card, I made goody bags for the kids that are going with us...gotta keep their energy up between movies! I got the popcorn bags at Michael's and are made by Wilton. The stamps are from the Into the Moonlight and Fictionally Inspired. I used watercolors and cut out the apple from red paper to make it stand out. I used Staz-On inks - Jet Black, Blazing Red, Moonlight White. Goodies are New Moon candy from Walgreens and Twilight conversation hearts. Also, hiding are trading cards and themed jewelry.

The next stop on the hop is Erica!

In case you get lost along the way, here’s the order of the hop (I have included the names and blog address for each person, please set the list up to link to all of the people included):

Make sure to leave a comment on each blog along the way for your chance to win your choice of 2 AI sets! Please leave your comments by Midnight, November 23rd!

Thanks for joining in the fun and enjoy! 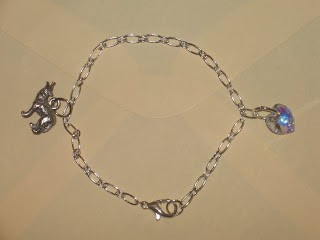 Here is my version of Bella's bracelet. I have made four so far and I think they are pretty good. In the story, the wolf is carved from wood, but I have no skill in that area, so I have the pewter charm. I am still debating about seeing if some brown Staz-On will stick to it. I found the chain at HL already put together, just had to add the charms. If you haven't read the books, here is the reason for the bracelet. Jacob, Bella's best friend and werewolf, gives her a silver bracelet with a tiny carved russett-colored wolf that Jacob hand carved. Edward was upset that Bella accepted a gift from Jacob, but always refuses Edward (she feels he is enough). Edward convinces her to accept from him on the grounds that it cost nothing. He give her a small crystal heart charm (it's diamond, but she doesn't know that), telling her it is like him - hard and sparking. Bella reminds him beautiful, too. So there is you tease, read the book. Thanks for looking!
April
Posted by mousekemom at Sunday, November 01, 2009 No comments: