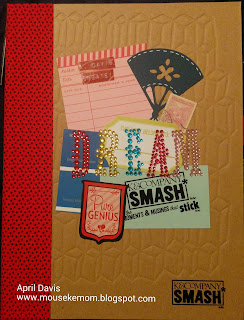 So I finally finished up my orange SMASH book.  Here is the cover of my new red one I have had stashed away.  This one is a bit different as it came part of a kit and has photo sleeves inside.  I used a left over Cricut cut fan from a past scrap page, a piece of paint sample, a library borrow slip, an old stamp, and some SMASH ephemera.  Thanks for looking!  April
Posted by mousekemom at Sunday, March 26, 2017 No comments:

I made a couple of generic ornaments for the Principal and secretaries at school.  I did different colors for each but only took photos of one.  The colors I used were Old Olive, Cherry Cobbler, Not Quite Navy, and Marina Mist.  The stamp is from Stampin Up Tags Til Christmas and punched with the ornament punch six times.  Fold each ornament in half and glue together.  I used nylon sewing thread to hang them inside the ball. 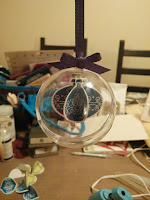 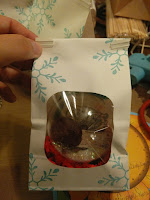 The packaging was found at Hobby Lobby and I stamped with Holly Jolly in Marina Mist.
Thanks for looking!
April
Posted by mousekemom at Sunday, March 19, 2017 No comments: 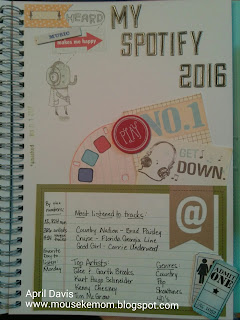 Spotify sent me this great email with a list of my listening habits, favorite tracks, most listened to artist, etc.  I thought it was a great snapshot of what I listened to over the year and a perfect SMASH page.  I used a SN@P filler card, some SMASH bits and an artist trading card.  The title is Tim Holtz metallic alpha stickers.  Thanks for looking!  April
Posted by mousekemom at Sunday, March 12, 2017 No comments:

I had a couple of challenging requests for the ornaments. 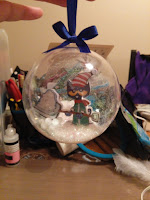 Pete the cat is well...ugly.  I had no idea what to do for this one and spent a good two hours searching images.  Silly me for not asking my youngest who knows Pete and said "His snow book, mom!"  I found the image from Pete the Cat: Snow Day and printed it multiple times, and with mirror image printing.  I cut Pete shoveling snow and then cut the shovel and his head out of another print, using dimensionals to make a multi-layered image.  I did this to both sides so it didn't matter which way the ornament turned.  I added some glitter to the snow and shovel then used hot glue to get Pete to stand inside the plastic ball.  Last, I added glitter snow and mini pom-poms for snowballs. 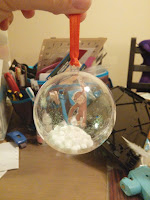 Next was Curious George.  I ended up finding this great image of a craft where he is hanging from balloons.  The balloons were a separate element and easy to leave out.  I shrunk the image, and printed it as I did with Pete.  I only used dimensionals on his head to make it stand out.  I used clear nylon sewing thread to make him hang from the top of the ball so he will look like he is hanging off a tree branch.  Then I added glitter snow and pom pom snow balls to the bottom, before sealing the ball with liquid glass and adding the hanging ribbon. 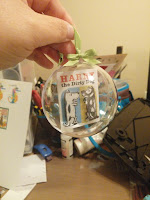 Last, is Harry the Dirty Dog.  I could not find any really good images of Harry, so I used the book cover and printed it like the other ornaments.  I cut the dogs separately and added them with dimensionals, then glued the book into the ball and sealed it.  I also made a Amelia Bedelia book the same way.
I somehow missed pictures of the Giving Tree (I made an actual book with tiny pages).
Thanks for looking!
April
Posted by mousekemom at Sunday, March 05, 2017 No comments: