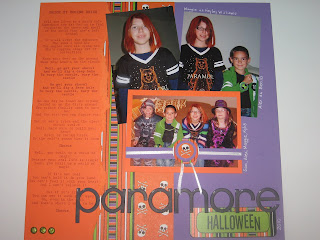 My daughter loves Paramore. I know, she's 10, but loves all kinds of music and Hayley Williams is a surprisingly decent role model, so I can't fault her adoration. She was Hayley for Halloween...too bad most didn't know who she was, even though she was wearing a Paramore shirt.
So the papers are Moxxie and the cardstock is SU retired Bold Brights - Only Orange and Lovely Lilac. I printed the words to Maggie's favorite song Brick by Boring Brick on Only Orange and tore the edge and layered with Moxxie paper. The stripes and skulls are the flip side of the same page. I used a coordinating Moxxie sticker for the Halloween. It said Happy Halloween, but I cut it between the two words and moved it so the "Happy was hidden behind the Halloween, so it looks like a complete sticker, unless you look really close, then you can see the seam. I used basic grey self-adhesive chipboard and ebony cats eye chalk ink to color the letters. I made the medallion on the photo from layered circles 3/4" to 1 1/4".
To finish, I added three SU Brights Glimmer brads to the bottom corner. Can I say while they are pretty, they are a pain in the butt? The glitter is all over the brad and makes it near impossible to separate the tongs! Gah...took me three times as long and lots of bending and prying with tweezers to get them apart. Bah!
Thanks for looking! April
Posted by mousekemom at Monday, January 31, 2011 1 comment: 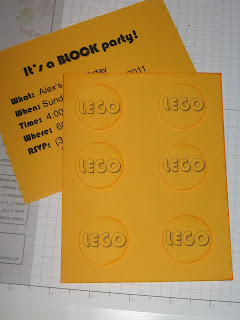 So my son is having a Lego-themed birthday party. I decided to look for ideas for party ideas online and found a suggestion for invites. They were more basic - simply standard cards that had the lego words printed across the front a few times to sort of look like the brick. Of course, I have to take it a step further...nothing like feeling competitive and one-upping it, right?
So, I chose a primary cardstock and sat down at the computer. First I printed the "Lego" using three columns and Bauhaus93 font (it was the closest I could get to it's icon). I think it was 36pt and returned twice between, to leave enough room for a circle punch. I fit 15 on a sheet and utilized the shadow and outline options in the format. Next, I set up the info four to a sheet and using two columns.
Once it was all printed, I cut them apart, postcard style...they are the size of an A2 card front (4.25x5.5). Set aside. I used a 1 1/4 inch circle punch to make the LEGO circles. I then used Stampin Up's Summer Sun and Only Orange to ink the pieces (both retired colors). Next come the dimensional on the back of each circle and mount three down and two across. How cute is that? My son is doing a happy dance about his lego block invites.
Thanks for looking! April
Posted by mousekemom at Sunday, January 30, 2011 No comments: 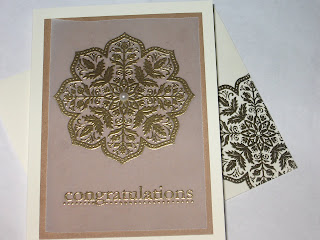 So, I got a postcard from one of my high school friends telling me about her parents 50th wedding anniversary. Her mom was leader of my youth group in high school, so I am excited to participate.
Card base is a Vanilla colored set from Michael's. I used kraft colored cardstock for the next layer, then stamped the medallion from the "Day of Gratitude" set from Stampin' Up in Whisper White craft ink and then coated in opaque gold embossing powder on vellum cardstock. Then I used a retired "Congratulations" set from SU for the sentiment, as well as the inside sentiment "on another year of happiness." (I wanted something more fancy, but didn't have one that was big enough...bummer!) After heat setting, I put one of the SU pearls in the middle, and repeated the embossing on the envelope. I hate how adhesive shows through the vellum, so I put the adhesive behind the stamped/embossed images. Super easy and beautiful! Thanks for looking! April
Posted by mousekemom at Monday, January 24, 2011 1 comment: 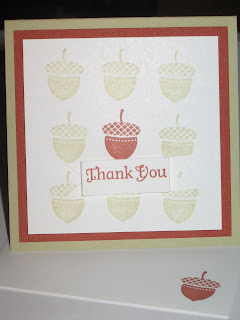 I finally managed to get the ink pads from my friend to finish the last few projects. Here are the other projects from the Des Moines Workshop from October. 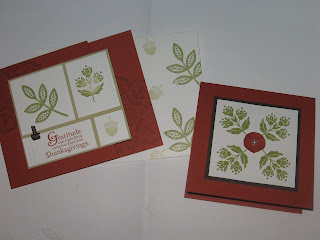 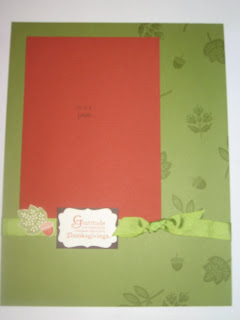 All projects center around Old Olive, Cajun Craze, and River Rock and use the Gratitude set from the fall Occassions mini catalog. We did several cards and one 8.5x11 scrapbook page. The card with the multiple panels technically used markers to color the stamps multiple colors, but I didn't have access to the markers, so I used the rock and roll technique to finish the one of the images. They also had us use dimensionals, lots of dimensionals...so cute. Thanks for looking! April
Posted by mousekemom at Saturday, January 22, 2011 No comments: 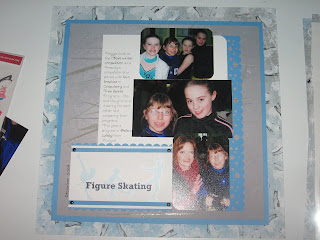 Yep, still catching up...here is my daughter from last December's skating competition.
Papers are Moxxie Twizzle, Sports Mania, and cardstock from Michael's. The LO is inspired from January 2011 pagemaps. The blue photo border is using SU's scallop punch, then EK Success's bubble border punch. The journalling is done in Creative Keepsakes's Curly font. The title is a Karen Foster rub-on and mounted on 3x5 white cardstock, then scraps of blue scallop. The slivers of blue on the title actually are leftovers created by the SU scallop punch. I added a black brad to each corner, then mounted with dimensionals.
TIP: it is super easy to attach tiny or thin pieces like the strips. I use a Xyron X Sticker maker. If you haven't seen it, it's the X-shaped holder with the other Xyron adhesive products. It's less than $10 and the refills are around $5 and come in permanant or repositionable.
Thanks for looking! April
Posted by mousekemom at Monday, January 10, 2011 No comments: