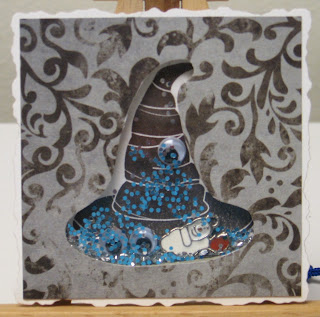 So I decided to try my hand at a shaker box.  I used a tutorial from Meg at Loven Stamps.  You can see the tutorial here.  The secret?  She uses the foam from the stamp set to make the shaker!  So I just got the retired Jack of All Trades set that my soul sister was kind enough to pick up for me at a rubber rummage sale.  It still had the foam and I love the hat...it reminds me of the Harry Potter sorting hat!
I used designer paper from a DCWV Timeless mat stack and the edging is cut using the deckled rectangle nestabilities, but moved to make it more square.  The hat is stamped in SU Early Espresso.  I followed the tutorial on how to remove the rubber from the foam, and used a little bit of liquid glass to seal it.  I keep the backing off the cheap dollar acryllic stamps because it makes perfect mini windows on cards.  (Hint: You can stamp on the acetate with Staz-On or SU Craft inks.)  I added a little bit of silver glitter, some googlie eyes, and a ghost charm I had in my stash.  Now I just have to think of a project to use it on!
Thanks for looking!  April
Posted by mousekemom at Thursday, October 31, 2013 No comments:

TGF is hosting a new challenge called Alter Ego.  The idea is to combine two different TGF characters to make a new one. 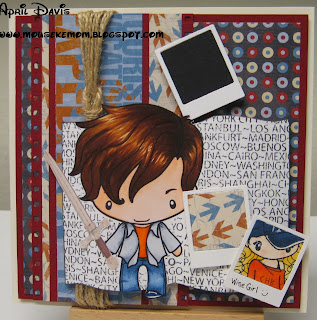 I have used this one before, seen here, but this is my Percy Jackson using Mer Ian and WS Flirty Edward digis.  I used Ian's head and Edward's body, but the trick is I copied his left side, flipping the image and moving it to the right, then adding a t-shirt under the open shirt.  His sword, Riptide, is a image I found online.  Percy is colored in copic markers, then cut out using Nestabilities Labels Seven.  I cut him so he looks like he is stepping out of the book (see one foot out of the book?).  I used my fingers to curve the paper and mount the "book" on dimensionals so the book seems to be rising off the base.  The text background stamp is from 7gypsies in Basic Grey.  The paper is Bo Bunny and Recollections on Very Vanilla base.  I used the film strip punch from EK Success for the strip border and some jute twine in a square knot to make it feel more like Percy's connection to the ocean.  I also tossed in some polaroid pics, especially one of his favorite demigod, Annabeth (from TGF's Miss Anya Hats Off).  The polariods are a die from Quik Kutz. Sorry I can't get a better image of the layers, but it kept coming out fuzzy.  Thanks for looking!  April
Posted by mousekemom at Wednesday, October 30, 2013 2 comments:

My baby turned 7 yesterday...oh, where has the time gone?  He has developmental delays and has just finally fallen in love with Sesame Street.  He also loves cookies and m&m's, so when we found the m&m cookies at Sam's Club, I thought they would be perfect for his class-shared treat. 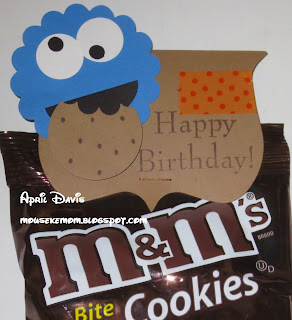 I used the Tim Holtz ornamental die to cut kraft paper and folded in half.  I used the Cricut to cut the scalloped circles at 1 3/4" from Mini Monograms on blue cardstock.  The eyes are punched from 3/4" circles on Whisper White.  The pupils and mouths are cut from Basic Black using the George and Basic Shapes cartridge at 1/4" circles and 1 1/2" ovals.  I punched the cookies from 1 1/2" circle on kraft, using a sharpie to make the "chips".  I used the scalloped circle punch to make the bite out of each, before mounting with a dimensional.  I used the SMASH tape on the base and a cheap dollar stamp for the sentiment in Chocolate Chip ink.  I attached the topper with a staple.
Considering that I put together 30 of these, they were quick to assemble.  I highly recommend using a glue pen on the small pupils, but the rest was fine to assemble with a SNAIL-type adhesive.  Thanks for looking!  April
Posted by mousekemom at Wednesday, October 30, 2013 No comments: 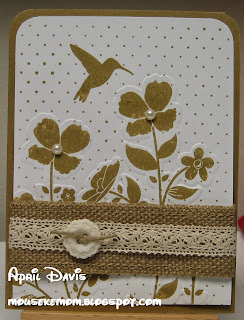 I am back with the other cards we made at stamp club.  The first is a vintage card with the new SU stamp/emboss set.  We stamped the Whisper White with either Crumb Cake, then embossed, before adding pearls on the flowers.  We used strips of burlap and the SU vintage lace and button's with jute twine to finish the card. 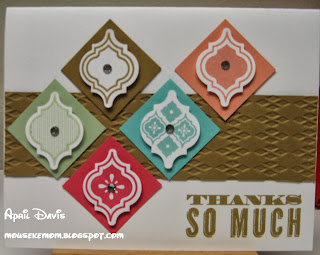 Next, we used the new SU mosaic set in the current In Colors.  We also embossed the strip with an argyle folder and added gems to each of the tiles. 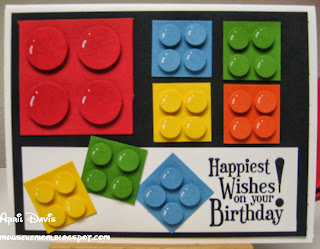 Last, is my absolute favorite (since we have lots of Lego-crazy boys around our family).  It is simply different sized squares, lots of punched circle,s and dimensions.  Here's a quick tip: cut the excess of your dimensionals into pieces to fit the tiny parts.  You get more bang for your buck!  I used a white gel pen to add a little more dimension to the bricks.
Thanks for looking!  April
Posted by mousekemom at Thursday, October 17, 2013 No comments: 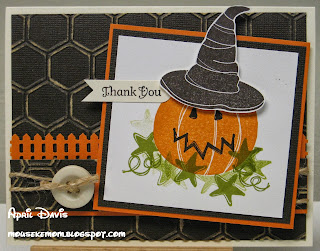 This is a quick card I put together with some of my new toys I got from a rubber rummage sale and a RAK from my soul sister.  The base is Very Vanilla with layers of Early Espresso corestock and Pumpkin Pie.  The border punch is Martha Stewart fence.  The embossed layers are the new honeycomb emboss folder from SU.  I used a bit of sandpaper on the embossed image to bring out the core color.  The stamp set is Jack of All Trades (retired) and inked in Pumpkin Pie, Old Olive, Jet Black Staz-On, and Early Espresso.  The sentiment is from Day of Gratitude (also retired).  I used a bit of jute twine and a button from my stash to finish it off.  Thanks for looking!  April
Posted by mousekemom at Wednesday, October 16, 2013 No comments: 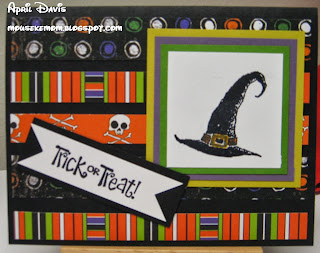 These are two of the cards we made at our stamp club.  The first one uses Moxxie papers, as well as SU.  The image and sentiment come from a SU set and absolutely escapes me what the name could be. 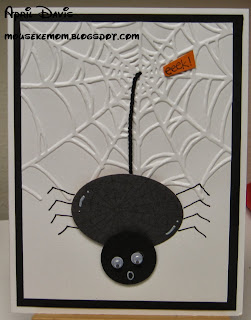 The second is made with the SU web embossing folder (I think retired), the wide oval and 1" circle punches.  We drew in the legs and used black twine poked through the middle of the web and taped behind the spider and the legs are hand drawn.  Last, are a couple of googlie eyes.  The colors are Whisper White and Basic Black.  Very quick and easy to make.
I will also be posting the other cards we made in tomorrow's post.  Thanks for looking!  April

Posted by mousekemom at Tuesday, October 15, 2013 No comments: 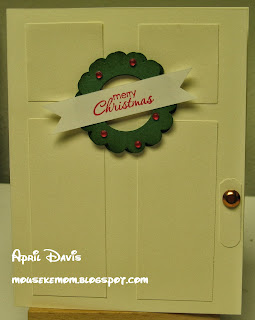 So this is my SWAP card for my stamp club.  I used Very Vanilla and cut rectangle panels at 1 3/8x3 1/4" and punched the squares from a 1 3/8" square punch from SU.  I used the SU word Window punch to make the knob plate and a brass brad for the knob.  I used a 3/4" circle punch on SU Garden Green, then punched again with the scalloped circle punch for the wreaths.  I used two for each wreath and inked them with Old Olive before stacking with dimesionals and adding bling colored with red sharpie marker.  The banner is made on SU Whisper White and stamped in SU Real Red with the SU Petite Pairs sentiment.  I warped the paper a bit and used a corner of the square punch to make the nothces.  The matching sentiment is stamped inside.
I realized after I put them together that I forgot to emboss the door pieces with the wood texture embossing folder...oh well.  These came together pretty quick so they could be massed produced.  Thanks for looking!  April
Posted by mousekemom at Monday, October 14, 2013 No comments: