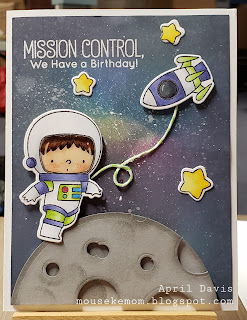 This is another card featuring MFT Space Explorer set and copic markers.  Can you guess the inspiration for my color combo?  Buzz Lightyear, of course!  I also used a little white gel pen to make highlights on the visor area and window before covering those areas in liquid glass (aka glossy accents).  The astronaut and ship are popped up foam tape.
The base is SU Whisper White.  I used distress oxide inks to try my hand at a galaxy background before spattering it with white distress paint, flicked off an acrylic block with a paintbrush.  I will admit, I used SU cardstock and totally would do this again with watercolor paper.  I had to be very light with the water to keep it from warping.  I love the chalky finish. 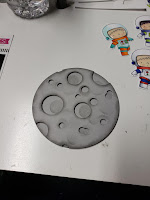 The sentiment is stamped with versamark and heat embossed in white.  I took a tip from Jennifer McGuire for the teather line.  Use a bit of glue on your fingers to spread glue on the twine, then shape into place and leave to dry on a silicone mat.

As I mentioned in the last post, the planet is made with a cutting two large circle dies, then using various size dies and punches to make holes in one layer.  I used matching ink and sponged around the layers and added some shadows.  I cut the finished planet in half to make two cards.
I am entering this into MFT Birthday Project Challenge featuring circles.
Thanks for looking!  April
Posted by mousekemom at Tuesday, April 28, 2020 No comments:

While I am stuck at home, I am using the time to brush up on my copic marker skills, so this challenge was a good excuse to color up some of the MFT Space Explorer set.  I did several color combos you will see in the coming posts but here is the first.
I am entering it into two MFT challenges this week.  The first is MFT color challenge 140. 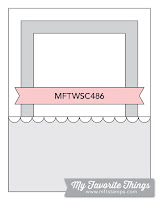 The second is weekly sketch challenge.  I will be honest and say I took some liberties with it by flipping the image, and moving the sentiment flag.  I also removed the second rectangle layer.  (Annnd, I totally missed the deadline.  I thought it was before noon on Wednesday!  Oh, well.)
I decided to use a SU Night of Navy background and the MFT Starry Night dies to cut the night sky, then backed it with holographic paper.  I put a few holographic sticker stars as well as the planets. 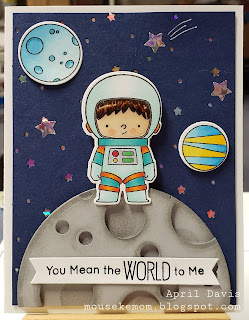 The large planet is SU Smoky Slate and I die cut two large circles, then used smaller circle dies and punches to punch out one of the circles.  I inked the circles and added shadows on the planet, before popping it up with foam tape.  I cut the planet in half to use on two different cards.  The astronaut is popped up on a double layer of foam tape.
The sentiment is stamped in versamark and heat embossed in black, then die cut with a banner die.  Thanks for looking!  April
Posted by mousekemom at Tuesday, April 28, 2020 No comments: 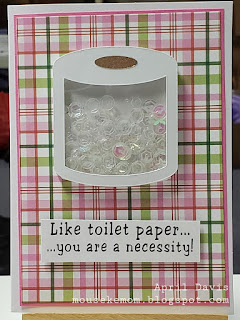 Being stuck at home stinks, literally.  I got this cute shaker svg from Queen & Co and made some cards to send to family and a few friends to give a bit of humor.  Everyone thought it was funny and I am glad they all saw the humor. 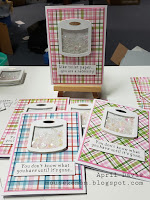 I used generic card bases from Hobby Lobby's Paper Studio line, My Favorite Things 6x6 Merry & Bright paper for the background, and cute sequins kit I found at Tuesday Morning for the shaker.
Thanks for looking!  April
Posted by mousekemom at Tuesday, April 21, 2020 No comments: