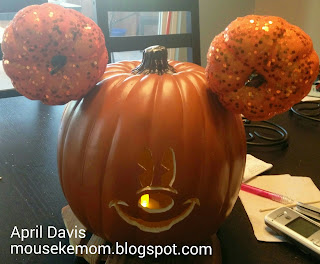 So we totally got screwed out of going to Disney thanks to Hurricane Irma.  I wanted something to perk up the mood because hubs and I were really bummed.  I had a fake pumpkin stashed in the Halloween box and have been wanting to try carving the foam and see if it is easier than a real pumpkin.  What to put on it?  Mickey, of course!
I found these small "ears" at Walmart for under $1 each and I had the pattern in one of the old kids books.  I realize I should have blown it up a bit more, but it worked okay.  I used a push pin to mark the pattern then an craft knife to cut.  I finished up by using some small craft files.  The foam was really messy and stuck to everything but it was easier, and less gooey, than the real deal.  The ears are attached with wood skewers.  I also cut a hole in the bottom, just big enough for a battery operated tea-light to fit.  Too cute to spook!
Thanks for looking!  April
Posted by mousekemom at Sunday, October 29, 2017