This year's card got way more involved than I had planned but it turned out really cute, so I shouldn't complain.  I saw a really cute window card on Pinterest that was way more detailed and involved than this but it inspired me to pull out the Disney Mistletoe die I had and put it to use. 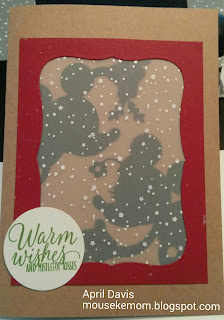 The base is kraft stock that came with the base and envelopes and is larger than the A2 size.  These are closer to 5x7.  I left it plain because I was worried about it looking too busy.  (I had embossed the test card and it really didn't let the rest of the image stand out.)  The die is cut on Basic Black, then set aside while I cut the Cherry Cobbler frames with a Nestabilities die.  (A SU/Sizzix Top Note Die would have also been awesome too, but I wanted a slightly longer and skinnier die).  The vellum is stamped in Whisper White craft ink using the stars from SU's Holly Jolly Greetings.  It took forever for these to set and they were still a bit tacky when I was assembling the cards the next day.  I put the frame and vellum together then laid it over the die cut.  I had to do a bit of trimming the remove the zig zag edges of the die cut that peeked through the vellum.
The sentiment is stamped in Gumball Green on a 1 3/8" circle punch.  I would usually pop it up on foam, but wanted to keep these very flat for mailing. Inside the sentiment is from a retired SU Paper Pumpkin kit from a couple years back, also in Gumball Green.  50 cards in just over 6 hours, minus drying craft ink overnight.
I gotta admit, it took me over two hours to cut the frames and die cuts alone.  Oh, how the Cricut machine would have cut that time down!  I will probably keep it much simpler next year.
Thanks for looking and Happy Holidays!  April
Posted by mousekemom at Sunday, November 19, 2017