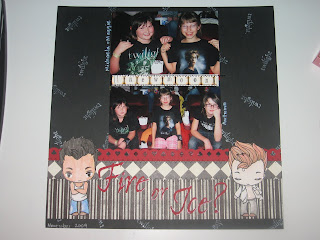 Here is the LO from my daughter going to New Moon for the opening night. We had so much fun meeting with friends and the girls sat all on their own, fully decked out in Twilight gear.
The LO is inspired from pagemaps...they are just awesome! The base paper is hand-stamped with the Twilight rubber stamp set from Barnes & Noble. (I made several different papers when I bummed them from a friend.) The B&T papers are Paper Studio from Hobby Lobby and were scraps that I kept. The red cardstock is open stock from Michael's and is punched with the EK Success border punch. The digis are from the Greeting Farm and colored in watercolor pencils. Edward is then covered in a very light coat of Zig two-way glue pen and dusted with micro-glitter. Font is Cricut's Stone Script and cut at 1.75 and 1.25 inch. Across the pictures is a scrap of white cardstock and layered with Tim Holtz acrylic film strip. I used Jet Black Staz-On and studio g mini block alphabet to stamp directly on the film to give it the look of part of the film. I also used a zig-zag stitch along the papers that are stacked. Thanks for looking! April
Posted by mousekemom at Wednesday, December 29, 2010

OMGosh! So cool! How you remember everything you use (and the brands and where you bought it) is amazing to me. Except for a couple of things, everything is "my stash". lol!