It's a killer challenge at TGF's Farm Fresh Challenge blog - NEA - No Embellishments Allowed!  You wouldn't think this would be hard, but it's harder than you think.  I am itching to grab something out of my embellishment drawer! 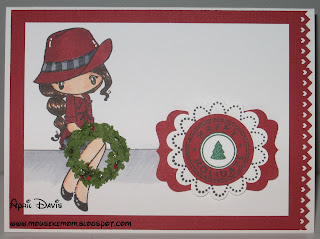 The base is from a prescored 4x5.5" card kit I found at Michael's.  It is mounted with a layer of cherry cardstock that I used the EK Success/SU pinking hearts border on one end.  The image is one of the three Miss Anya Hats Off set and is colored in copic.  Because she looks like she is sitting, I free-hand sketched a line and colored in an area under her seat.  Anya is holding a wreath I made by cutting a circle within a circle, then used scraps from the pinking hearts border punch.  (Just collect the hearts as you punch the border and adhere them to the circle base with liquid adhesive, then let dry.  TIP: used a scrap of post it note to make a little handle to hold the circle while you glue the hearts.)  The sentiment is made from two SU retired sets - Rivited and So Many Scallops - stamped on Whisper White and cherry, then mounted with dimensionals.  Now, it's your turn.  Head over to the FFC blog to join the fun and check out what the other talented DT members are doing!  Thanks for looking!  April
Posted by mousekemom at Monday, December 05, 2011