i wanna be Edward Cullen LO 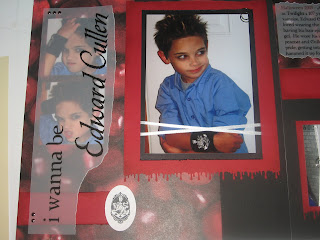 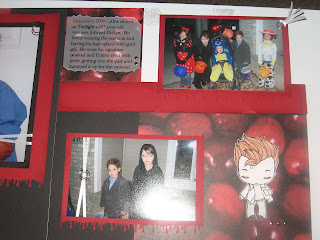 Here is my son hamming it up for the camera Halloween 2009. He did a great job portraying Edward Cullen from Twilight. Isn't he just too cute?
The LO design is from Close to My Heart's Cherish book. Papers are Bazzill black and dark red. The apple B&T paper is from Hobby Lobby. The Team Edward B&T is hand stamped from the Barnes & Noble Twilight Stamp set in Dove Grey Staz-On. The red Bazzill is inked with Blazing Red Staz-On. I also used the Martha Stewart Drippy Goo punch on the photo mats. I roughed up the edges on some of the pieces. The title is printed in be safe (Edward's signature) and twilight fonts on vellum. The Cullen crest accent is also from the Twilight stamp set from Barnes & Noble. The Edward embellishment is Flirty Edward from the Greeting Farm. They have it in Digi or as part of a rubber set. No worries, they have all the Cullens in some form! Yes, I made him so he sparkles! It's hard to see but I assure you, he does sparkle. I also added some ribbon, brads and spiral clips.
Thanks for looking! April
Posted by mousekemom at Tuesday, June 15, 2010