So TGF's Chat Night at SCS was this past Friday and this month's theme was "I've Got the Music In Me."  The three challenges include 1) Favorite Song, 2) Favorite Music Video, and 3) Favorite Lyric.  I love so many songs and my favorite is constantly changing, so I decided to focus on one of my favorite genres...Disney.  Who doesn't love at least one Disney song?  Seriously, I think everyone learns "It's a Small World" in preschool and I absolutely remember my kindergarten teacher playing "Winnie the Pooh" on the piano while we all sang along. 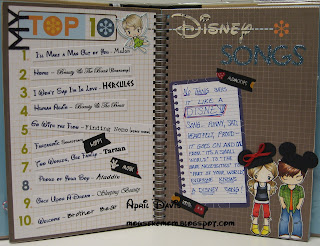 This SMASH page is a top 10 of my black SMASH book.  I added the "my" and "songs" using Martha Stewart double-sided sticky alphabet roll I found on clearance at Michael's.  You peel, stick, pick off the top layer and use glitter, flocking, or metallic transfer.  Here, I used my black and light blue glitters.  The "Disney" is from Cricut's Mickey Font and cut at 1 1/2" on printed music paper.  I typed the titles using Waltograph font from dafont.com and the movie titles are fonts on my computer and from Creating Keepsakes.  The images are from The Greeting Farm's Fairy Princess, My Guy Ian, and Miss Anya Lounge sets and colored in copic.  The fairy has some spica and glitter gel pen on the wings.  The mouseketeers are wearing ears cut from a Mickey icon punch that is punched at the edge of the page, creating a hat.  Did you see my favorite new tissue tape?!?!  I found it at Archiver's this weekend and it is made by Queen & Co.

Thanks for looking!  April

Update:  I won one of the three TGF Chat & Challenge Night challenges!  Woohoo!﻿
Posted by mousekemom at Monday, June 18, 2012

Great Smash page April! I've been meaning to start my Music Smash book as well buuuuut you know how it goes (lol) no time, no already made cool music smash book, etc :D

And yes you are right, we all love a Disney song. The Phil Collins one from Tarzan has brought tears to my eyes. What a sap, huh? hehe.

Thanks for playing with the CNN Music challenges.
Jess

Ps. please tell your daughter she did a wonderful job with her Wicked creation. Elphalpa looks simply adorable (which btw, is my favorite character who is completely misunderstood). ok, enough of my ramblings. lol
Thanks!