I just love baseball!  I don't seek out the games, but if I stumble on my favorite team playing, I'll watch.  I also love baseball movies...from Eight Men Out to A League of Their Own to The Sandlot, I love them all.  This is for Anyone for Anya's "Anything but a card" challenge. 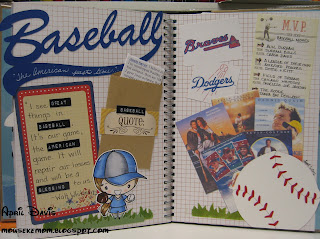 I started the SMASH page by cutting dies from Cricut's Sports Mania cartridge.  I cut "Baseball", the ball, and grass under the player's feet.  The nifty thing is, I cut one I decided was too big, but ended up using it as a stencil to ink onto the page.  It was a neat way to add texture without adding bulk, as my poor book is already busting at the seams.  I added a subtitle in gel pen on the title and printed posters of some of my fav baseball movies.  I also added a quote from Walt Whitman and tucked my favorite monologue from Bull Durham into the pocket.  The quote is printed on a self stick school tag set and used the SMASH labeller.  I cut the title off the top of a sheet from the Quotes SMASH pad for the title on the pocket.  The MVP list is my favorite movies/characters/teams of baseball and is from the Entertainment SMASH pad.  The Braves & Dodgers emblems I found online....the Braves are my favorite team and the Dodgers were the first baseball game I ever went to see and it's where I grew up.  Last, the character is Catcher Anya from The Greeting Farm and is colored in copic, with a few details of Sakura Stardust clear gel pen.  Thanks for looking!  April 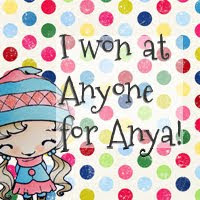 Posted by mousekemom at Tuesday, September 04, 2012