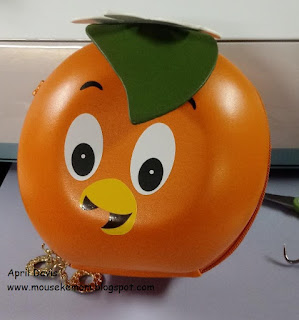 We are huge Disney fans in this family and we each have favorite characters.  My oldest likes the Orange Bird and has been collecting the Disney Trading Pins.  I thought she would like a small purse for running around the parks, but the one on Disneystore.com is a whopping $65!  I found this tutorial on As the Bunny Hops via Pinterest and it's cost was $19 for the purse (Amazon) and pennies in vinyl.  What a great gift!
Amy at As the Bunny Hops was kind enough to put up her Studio file, but it wasn't easy to move the file to Design Studio.  I finally found an online converter that seemed to do the trick and I had to play around to get the image through contour so I could have all the layers.
I started with the inside of the beak (cut in brown vinyl), then the full beak (yellow).  The image shows up a tad wonky in DS, showing just the lines around the inner mouth and no way to fill it so I cut the full mouth and just weeded the outer beak.  It wasn't too much vinyl (less than a 2x2" square).  Next I contoured the eyes.  I started out doing the larger part by contouring all three parts of the eye as one group so I can weed the pupil out.  (I ended up layering the white and black, but fixed that after the fact in DS, so the next time I cut it they will nest.)  Last I contoured the pupil and brows.
Once I figured out how the contour worked, I placed all the pieces back together like a puzzle and grouped them.  When you hit the Make button, it splits all the colors into separate mats.  To make it easier to put together, I used the Write function to make a scale base to build on.  I taped the picture to a light box, then taped each layer over the image as I worked.  I picked up the black cut first, taped the white to the picture and used the image to place the pupils in the right position.  Be careful not to let the vinyl touch the paper!  Once the eyes were together, I used tweezers to put the inner mouth on the beak, then taped the completed beak in place over the image and repeated my steps to pic up the mouth.  Last, place on purse and rub!
I am waffling about whether to paint the leaf a lighter green like Amy did.  I don't think it looks too bad and the more vintage pics show a bit darker green so I am thinking I will leave it.  I will say, I am looking to replace the chain strap that came with the purse, so it's off to the craft store.
Thanks for looking!  April
Posted by mousekemom at Monday, December 24, 2018