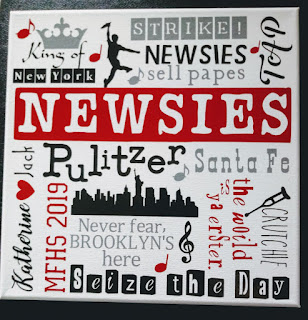 I recently watched a great tutorial at JenniferMaker where she made subway art with vinyl on canvas.  I was inspired to make a canvas for my son.  He recently played Darcy and an extra newsie in his high school production of Newsies.  I found images online and mixed various fonts to create this.  He was thrilled with it and mentioned having one made for each of the school plays he participates in.
I will be honest, even using the permanent vinyl, it was hard to get it to stick.  I used Cricut and Oracal 651.  The Cricut brand was much easier to weed and remove the backing.  The Oracal brand has a stiffer backing and it would flake apart, leaving a very thin plastic-like layer behind that was a pain to remove.
I have read about prepping the canvas with mod podge, gesso, or acrylic paint.  I think these would help and will be trying this in the future.  I will let you know how it works out.  Thanks for looking!  April
Posted by mousekemom at Friday, June 21, 2019