So I was picking through some colored images I had and was inspired to join Pixie Dust Studio for this week's "Double the Fun" challenge.  Instead of a card, I decided to do a spread in my SMASH album.  I have posted a Twilight page and decided Harry needed one of his own as one of my favorite series. 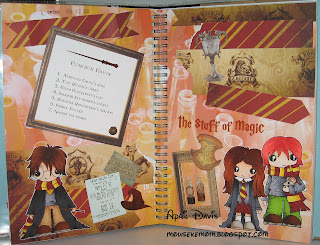 My spread uses the bottles pages in the black SMASH album with layers of Moxxie HP designer paper.  The strips are the same sheet of paper, just the opposite side.  I ripped or used a square punch to make the edges of the strips.  The strip above the Horcrux fram is shaped into a banner by folding under a small portion on each end.  I printed the Horcrux list on cardstock using Lumos font found at dafont.com.  The frames, Goblet of Fire, Hogwarts logo, and Magical People sign are from Creative Imaginations HP line diecuts packet.  The wand, sorting hat, and title are from Moxxie's HP rub ons.  The potion bottles and Ministry of Magic seal are from Creative Imaginations HP licensed cardstock stickers.  I also added my HP7 ticket stub.  The images are PDS Harry, Ron & Hermoine and are colored with copic.  I used my SMASH date stamp with some Timber Staz-On to add the date at the top.  Thanks for looking!  April

This is SO amazing! I looove your Harry, Ron and Hermione! Your coloring rocks! Such an awesome smash-ed page <3

This is AWESOME! I love Harry Potter! I bought those same digis from Pixie Dust Studio, but I didn't color it (I've only used Harry once) as nice as you did! Awesome!

That is so fun! I love Harry Potter more than anyone in my house, so I totally appreciate this spread! Very cute!

I have a blog award I want to give to you! You have some of the coolest ideas ever! Please come check it out when you can!