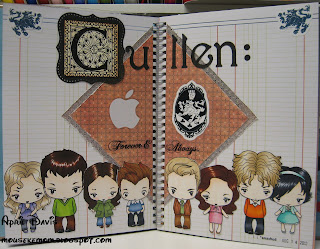 I started to make this for a digi challenge at TGF, but failed to get it done...obviously my idea was too big of a scope for the time I had.  I barely had them colored and cut before the deadline, let alone finished!  LOL  Oh, well, such is life.
So, all the characters are from The Greeting Farm's Wild Sprouts and are colored in copic.  The paper is from a 6x6 stack I got at Hobby Lobby but I can't swear on who it's from.  I distressed the edges then cut it on the diagonal.  The rampant lions and Cullen crest are from a sticker set I got from Toys R Us and made by NECA.  I found this iPod icon to use as the apple...my daughter cracked up and asked why I would use it, but really, why not?  The "Cullens" is made using Cricut's Nursery Rhymes font and a rub-on I got a Michaels.  I put it on a piece of Very Vanilla distressed with Tim Hotz distress inks and a sponge dauber.  Once it was done, I cut a 3.75" square of black and used the Martha Stewart punch around the page on it.  The rub-on was a bit sticky, so I decided to distress it and cover it a bit with Gold Glow smooch.  I also did the rest of the letters before mounting them.  The "Forever & Always" is from Creative Imaginations Mariah Johnson collection.  I was originally going to use a different quote, but it cluttered up the page too much.  It was supposed to say "Cullen: family is thicker than blood"  Oh well, the "forever & always" works just as well.  Thanks for looking!  April
Posted by mousekemom at Wednesday, August 15, 2012

WOW APRIL.. I absolutely LOVE your page. You did a fantastic job with the Cullen family.. I was at the movie Friday Night and they showed a preview of the newest Twi-Movie,and needles to say the whole auditorium with crazy..