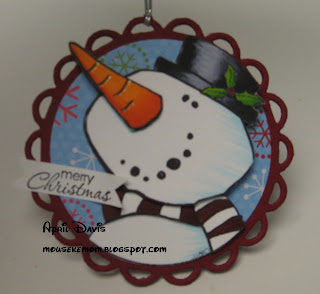 This is for Tiddly Inks Design Team Call.  I used the snowman freebie image (found here) that was recently posted and colored it with copic.  I played around with my photo program and flipped the image so that I could use this as a two-sided ornament.  I also wanted a lot of dimension, so I reproduced the image several times so I could cut it into layers.  In total, each side has four layers.  Finished, there are four carrot layers, three head layers, two scarf layers, and one base.  It is all layered with dimensionals.  I also added a little sheen with the Spica Stardust pen on the scarf and the Sukura Stardust gel pen on the carrot nose.  The image is mounted on a Nestabilities circle that is mounted on the lacy circle.  I cut the cardstock base three layers thick to give it some stability.  The sentiment is from SU's Petite Pairs and is stamped in Jet Black Staz-On.
﻿﻿﻿

﻿﻿
﻿﻿﻿﻿
Be sure to drop by the Tiddly Inks site to check out the other DT entries.  Thanks for looking!  April

this is so lovely, great colouring in too :)
BTW thanks for visiting my blog
http://inmy-craftroom.blogspot.co.uk/

I've emailed you the password for the marker storage tutorial file :)