This is for TGF's Farm Fresh Friday Digital Getdown and Deconstructed Sketch #16. 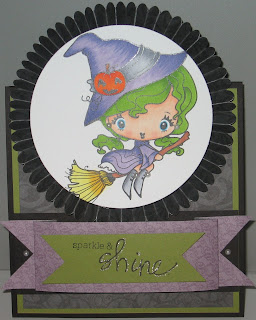 The base is Basic Black with layers of Old Olive and Cast a Spell retired designer papers.  The banner is made by taking a strip of paper and using a square punch at an angle to notch the ends.  Next, I scored the strip twice on each end 1/2" apart to create the furl, then tacked the ends of the banner, leaving the middle to puff out.  The paper flower is made using a tutorial at Stampin' with Heather.  It is the same designer paper as the card base, but looks darker with  the folds.  The image is TGF's witch digi and is colored in copic markers.  I added little pearl earrings and button on her boots.  The sentiment is from Michael's dollar bin and stamped on Old Olive in Jet Black Staz-On.  I used the Sukura Stardust gel pen to add some bling to "shine", notched like the big banner, attaching with dimensionals.  I chose not to embellish it too much because of the large flower and banner add a lot already.  Sorry the photo shows a bit of shine along her hat.  Thanks for looking!  April

I love your use of Jen's sketch! Really cute card.:)