I am a bit of a horror/occult nut.  I love books and movies of the paranormal genre.  I still remember the first time I saw a clip of Salem's Lot...I was 8, maybe 9, and it was the middle of the night.  I snuck out to the living room to watch tv.  It was the scene when the graveyard worker hears scratching inside the grave he is getting ready to fill in and he opens the lid.  The kid in the coffin sits up, grabs him by the neck, and...yeah, I screamed bloody murder and didn't sleep with the lights off for weeks!  I watched the remake mini-series when I was pregnant with child number two - hubby was at a meeting, preschooler in bed - and it still scared me silly...I was watching it with the lights on, blanket to hide under, and remote in hand to change channel at the last second.  I know...what a wimp!  LOL
I have read tons of stories from The Ultimate Dracula to Twilight to Bram Stoker's Dracula and love them all.  I had to read it for a college lit class - Literature of the Occult - most awesome lit class ever!  If you have never read Dracula...I beg you, read it!  It honestly sets the bar for good vampire stories. 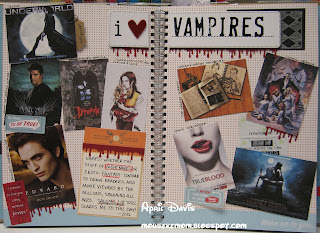 So, if you have not noticed, I love snatching pics from the internet.  I also swiped an extra NECA New Moon trading card I had stashed.  The blood is the Martha Stewart Drippy Goo punch.  I used the little SMASH post-it tags and the journal slip is from the Entertainment SMASH pad.  I wrote where the vamps pictured were from, as well as adding my movie ticket from Abraham Lincoln: Vampire Hunter.  The tab sticking from the Underworld pic is punched from the Decorative Label punch from SU and held in place with a Tim Holtz mini paperclip.  The journalling is actually the backing from the SMASH pockets packet, trimmed and mounted on the journal slip.  I covered the resturants part with more "blood"...I couldn't resist the "Dinner is Served"...come on, it's totally campy and you know it!  The sticker next to Edward is from a Hallmark sticker set my daughter graciously shared with me.  The title is from a clearance rack at Michaels and I used the Autumn Leaves license plates alphabet to finish the title.  The black background behind it was a left over piece using the checker board from Artful Inspirations Twilight-inspired line of stamps.  Thanks for looking!  April
Posted by mousekemom at Tuesday, July 10, 2012

Hi April. I am so loving your SMASH book! I still need to email you back about the books. I just finished the first book and about 35 pages into the second. I have to admit, I do love this set so far. Different yes, but still love the underlying plot. lol.... Anyway, you need to move.... I would love to spend a whole week with you just watching all the movies and talking books that you and I have in common. I haven't seen trueBLOOD yet, but sooooo want to. Other than that I am a Vampire freak as is my daughter. We have the whole Buffy the Vampire slayer series on DVD as well as Angel. LOVE them! I have all of the Twilights in Hardback/movies/ soft cover for both kids(we family read them together as they came out)lol... My family and I are a bit weird, but we're ok with that. lol... I am so going to steal your idea and make my own SMASH like this. I think it truly shows so much about you and what a wonderful idea as most of the time I am behind the camera. At least it would show who I am. Hope you are well. Can't wait to see the rest of your SMASH. Hugs, Lisa