And they lived happily ever after...

This is for TGF's week 4 royalty challenge.  This week we needed to be as creative as possible, but include at least one of the following: castle, crown, carriage or carats.  I managed three of the four, so I am pretty happy with myself. 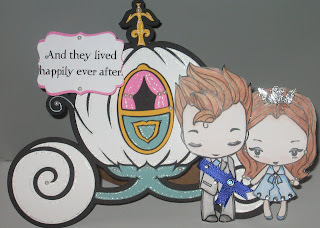 The carriage is from Cricut's Happily Ever After cartridge and is Cinderella's carriage cut at 5 1/4".  It is backed with chipboard and I cut a chipboard easel for displaying.  It is decorated with Sukura Clear Stardust pen and pearl accents.  The images are TGF's Dressy Edward and Dressy Camille digis and are colored with watercolor pencils.  I added the ribbon sash to Edward and cut the crown, dipping it in silver glitter, then making a cut in her hair to slide it in.  I also added pearl earrings and bracelet, as well as adding some extra bling to her dress.  They are mounted with a thick foam dimensional.  The sentiment is printed in Twilight font and cut out with the decorative label punch.  I love the TGF Twilight inspired characters and thought they were fitting because the story is so much like a modern fairytale.  I just couldn't resist using them!  Thanks for looking!  April