This card is for Deconstruting Jen's sketch challenge and Pixie Dust Studios Counting Along challenge. 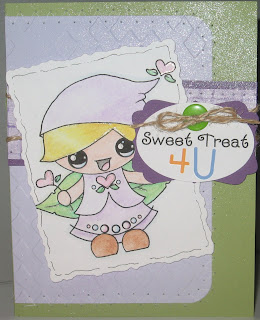 The base is SU's Pear Pizzaz.  The lilac and dark purple are generic cardstock I got at Michael's and the print is from a stack I got ages ago.  Following Jen's sketch, I rounded the corners of the large square layer and then zig-zag stitched around it, after running it though the cuttlebug with the distressed diamond folder.  Then I ran stitches along the straight layer.  Next was a quick spritz with Vanilla Shimmer and Berry Smooch spritz.  (My vanilla sprayer broke, so it is in a mister bottle, but I think it sprays a bit heavy and wild...oh well.)  I cut a slice in the Pear base along the fold to thread some jute twine.  I then threaded it through the sentiment and button, tying it in a bow.  The sentiment is printed on white cardstock and I added the "4 U" rub-on.  The image is a darling pixie from PDS, colored in watercolor pencils, and cut with the deckled Nestabilities die.  I added a few accents with the Sukura Stardust gel pen in clear.    Thanks for looking!  April
Posted by mousekemom at Monday, June 27, 2011