Here is a card I started for last week's FF Friday challenge at TGF, but I got sidetracked and had to put it aside...BUMMER! So I decided to enter it into Anyone for Anya & friends polka dot challenge. 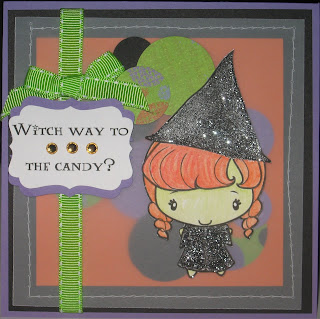 Card base is retired Lovely Lilac from SU and layered in Basic Black and Only Orange. I punched circles from some left over Booville paper and embossed some of the circles with the dots 5x7 cuttlebug folder. You can't really see them under the vellum though, so that didn't work so well. I sewed the vellum along the edges, but left most of the circles free floating under the vellum. The don't wiggle around as much as I hoped, but the do move some. The witch is TGF and colored in watercolor pencils and coated in black micro glitter. The setiment was printed on white cardstock, then I used the new designer label punch from SU and punched it again in the lilac, cutting it in half to frame the sentiment. I added some ribbon for texture and the jewels for some dimension. Thanks for looking! April
Posted by mousekemom at Saturday, June 04, 2011

What Great Job? Adorable image!
Thank You for joining in at Anyone For Anya!
Tons of Hugs, Dangina

A gorgeous card! Love the sparkly hat and dress. Thanks for joining in the Polka Dot challenge at Anyone for Anya? this week.
Susan xxox