This card is for this weeks TGF Royalty challenge, Stamp Something's Punch Something challenge, and Paper Sundae's Girly Girl challenge. 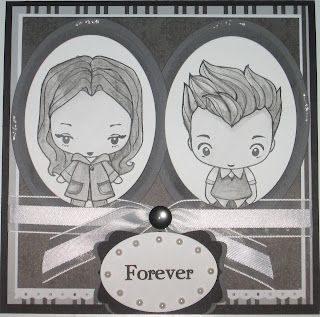 Base is Basic Black cut at 5 1/2x11. Layers are Recollections TimeFrame and Whisper White with accents of Basic Grey. Images are Camille and Edward from the Greeting Farm and cut with Nestabilities classic oval die. They are colored with watercolor pencils and blended with SU's blending pen, then mounted on another oval that was cut, embossed, and inked. I used the Sakura clear Stardust pen for some accents. The sentiment is printed on WW using the Twilight font, then punched using the wide oval and mounted on the designer label punch. I used half pearls to frame the sentiment. The dotted scallop border punch was used on one of the base layers. Sentiment and images are mounted with dimensionals. Some organza ribbon with a black gem finishes the card. Inside is done using scraps from card front. I left it unstamped so I could use it for a wedding, anniversary or other card. Thanks for looking! April
Posted by mousekemom at Sunday, June 12, 2011

I can definitely pull the black and white from the cake image and of course, Edward and Bella are timeless :_) Thanks for playing in this week's challenge and sorry about the Gallery issues! We're glad you found the new place to enter!

Thanks so much for joining us at Paper Sundaes this week. Love your ribbon accent.

So adorable, love the images! Thanks for playing along in our "girly girl" challenge over at Paper Sundaes :)