This week's Farm Fresh Friday Throwback challenge is "Anything but a card".  Now, in a throwback, your can't use any newer images and they give you an excluded list.  Think, think, think.  So I was visiting other blogs searching for some brilliant idea and lo and behold....I come across a blog with a coloring book! 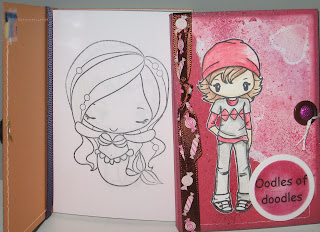 My kids are constantly begging me to print out my digis for them to color, so I busted out the rubber TGF's and started stamping in one of those Michael's dollar notebooks with the little pens.  I ripped off the covers and pulled out some of my SU paper scraps.  This is Peach Parfait and a retired fusha color.  The covers measure 4.5" tall by 6.25ish".  (I say "ish" because one was closer to 1/2".)  I then inked around the edges in cat's eye chalks - Chestnut Roan, Charcoal, Rouge and Fusha.  Next is scraps of Bo Bunny Pep Rally and the pink hearts are from a stack.  I ripped them at an angle, adhered, then sewed around the edge of the cover.  Next, is a quick spritz of smooch in gold, emerald, berry and cosmic pink.  The brown candy ribbon is from Michael's and the other is Night of Navy from SU.  Images are TGF's Later Skater Ian and Anya, colored in Crayola pencils.  I wanted them to look unfinished to go with the coloring book theme.  The sentiment is printed in Comic Sans font, cut and embossed with a nestabilities circle, then stenciled with coordinating colors Lucky Limeade and Purely Pomegrante, then mounted with dimensionals.  I used SU's brights glimmer brads that are slid through a button to make a shank.  I punched holes in the back to run thick embroidery thread through to make a closure.  I didn't want too much dimension on it because it is a coloring book cover.
I'll post pics later of the key rings coloring books I made of the TGF digis to keep in the car for outings.  Thanks for looking!  April
Posted by mousekemom at Tuesday, July 05, 2011